The calls started about three weeks ago.  They called my home number and my cell phone.  They were relentless.  Then I began getting the mailers and postcards.  Soon, it was the TV commercials.  Hateful commercials.  I just wasn’t ready for it to start up again so soon.

Didn’t they think this could be just too much too soon?  Haven’t we had enough?  We’re a democracy of course, but couldn’t they have scheduled it for say, June?  They could have said the machines are down for repairs or something.

There’s a county measure on homelessness; city propositions on cannabis taxation, enforcement and permits; another city prop on harbor department leases and one on a building moratorium.  The mayor is up for reelection and there are the city attorney, controller and city council seats up for grabs.  Only in Los Angeles can you find people with names like Diane “Pinky” Harman or David “Zuma Dogg” Saltsburg running for mayor.  She’s a retired educator/actor (of course) and he’s a community activist (of course).

The most contentious is the member of the board of education for the Los Angeles Unified School District.  I don’t have kids, but will obviously vote because well, as they say, kids are our future.  And lately, the future has been looking a bit bleak.  Not four horsemen of the apocalypse bleak as I see written on Facebook daily, but ordinary, everyday bleak.  Like the other day when I went to the store and the cashier said I owed $7.36 cents.  I handed her a $10 bill but then I said “oh wait, I’ve got a penny.”  The look of horror from the cashier was, well, priceless.  I was truly rooting for her deep down inside and I knew she could figure out the change if she really wanted to.  The look of horror quickly changed though. I could now see the bubble over her head which read “you bitch!”  A moment passed and the lady behind me gave her the answer.

We live in a great country, but our education system is extremely flawed.  You see it every day.  Kids seem more interested in Snapchat than civics.  If they even teach civics at all anymore.  And basic math like providing change — is that taught? (obviously not) What about life skills you need when you get out into the world?  Wouldn’t it be great if they could teach a class on budgeting, filing your own taxes and how to negotiate buying a car or a house?

When I was in high school there was a class only open to seniors called Contemporary Problems.  Mr. Herman was the teacher and his classes were packed.  He would have interesting people come in to speak to the class on what they did, how they got into their profession and how they were making a difference in the community.  On days when he didn’t have guest speakers we talked about what was going on in the world.  He asked us questions, asked us our opinions and asked us to back those opinions up with facts.  Our only “tests” were things like – write an essay on your meaning of life…or death…or whatever.  It was engaging and interesting and yes it was before we could hold the information of the world on a little computer in our hands and find out everything in a split second.  We had to think.  We had to use the gray matter in our brains.

It was also before we were completely bombarded with information from more than just TV, radio or newspapers.  We could hear or read what was happening, but we could also turn it off or put it down.  Now we can’t.  As I sit here and type this, my cell phone chimes, my iPad beeps and my computer scrolls messages into sight.  We are distracted by nonsense.  We are distracted by shiny objects.  We are distracted by reality TV, cute kittens, and Instagram posts.

Full disclosure, I’m an Independent who voted for Hillary.  Like many, it wasn’t because I really wanted her to be president, but more so that I didn’t want Trump to become Commander-in-Chief.  And I liked her “Love Trumps Hate” thing.  Although I didn’t really hear what either candidates platforms were since they just spent a huge amount of time slinging shit at each other.

Then like most people, I was more than surprised with the outcome of the election.  I watched as the reporters and pollsters squirmed, refusing to call the results in many states until most precincts returns were counted. It was hard to watch, so I turned it off at 10:30pm Pacific time, hoping for some crazy turn of events while I slept.  I awoke to the realization that reality TV show host Donald J. Trump would become our next president.   For better or for worse, this could only happen in America.

I found that my biggest disappointment that day after the election results was with the press and the pollsters.  How could they have gotten it all SO wrong? Where were they conducting these polls? Of the over 231 million eligible voters, why did only about 138 million of them actually cast a vote?  Why did over 93 million people sit this one out?   On Monday it seemed like a fait accompli that Hillary would win.  By Wednesday, at least two close friends told me they had been sobbing all morning and voices of a coming armageddon cried across social media.  I went on with my day — my thought is that it’s not going to last forever, just the next four years.  The pendulum has to swing in the other direction now and again.  If it didn’t we’d be communists and nobody wants that.

Over the next few weeks with the holidays and New Year approaching I started hearing such hate speak for the “idiots,” “red states,” and “middle-American’s”  that voted for Trump.  It was nasty and vitriolic speech aimed at people they knew nothing about.  “Hillbillies” and “red-necks” they were called.  So much for “Love Trumps Hate.”  So I checked the internet and found the breakdown of counties on Politico for the state I’m originally from and the one I currently live in. 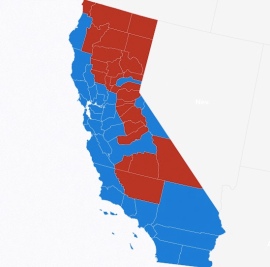 New York State was a big surprise — mostly Republican with blue around the major cities, except part of New York City where Staten Island even voted Republican.  And Manhattan, Queens and two other counties in the state which are in light green only show partial results (I got this off Politico, so I’m not sure why it hasn’t been updated at this point).

The way folks were talking it sounded like only people in the middle of the country voted for him, but as you can see this is not the case.  I knew several people who voted for Trump and while I disagree with them, I don’t think they are idiots or crazy or racist people.  I realized that the extremes on the left and the right have become so polarized and are unable to understand that as American’s we are each allowed our individual beliefs.  The extremists have gone so far that they belittle, berate and boycott those who disagree with them.    But we can agree to disagree, can’t we?  We can still respect each others points of view even if we don’t agree with them.

What am I looking for in our next presidential election?  I’m looking for a strong MODERATE – Democrat or Republican – not the extremists who dig their heels in and refuse to compromise.  Not the politicians who stomp their feet like children because they point across the aisle and yell, ‘but you let them do it, why can’t we?’  They sound like they’re in kindergarten.   I want a candidate that is not told by the party it’s “his or her time” — give us the candidate that is the best for the job and has the best shot at winning.  Black, white, asian, latino, male, female, gay or straight — I DON’T CARE, as long as they are up to the task!  I’m looking for someone who won’t sling shit everywhere — I want someone to tell me what they CAN DO and NOT what their opponent CAN’T DO.  Is any of this too much to ask?  Can the moderates all get together to create a new party?  We can call it Moderates United Against Hate — MUAH!

I don’t know whether it’s just too soon from the last election or the fact that I’ve been binge watching Scandal, but I’m tired of politics.  I’m tired of elections. But I’m mostly tired of the hate.

In the meantime, I will vote on Tuesday, March 7th…it’s my civic duty as a citizen of these United States.